It’s been a while; I hope y’all had a fantastic Thanksgiving! But, unfortunately, it’s back to reality and back to classic friendship and relationship #drama. So, let’s get started!

Question: How do you deal with drama in a friend group?

Answer: There are few friend groups that manage to work in perfect harmony for extended periods of time. And, if they do, it’s usually because they’re too cliquey to hang out with other people or include others in their plans so they’re trapping themselves in a bubble. So, when problems inevitably do rise in your friend group, how should you deal with it? Well, part of it depends on where the drama is arising from, so I’ll comment on a few different common scenarios and how to handle them.

Scenario 1- some people in your friend group feel left out.

With this scenario, usually, a group tends to have an unspoken sort of hierarchy. This can cause drama when a select few people are doing things together without inviting the rest of the group leaving the “outcasts” feeling underappreciated. To deal with this in a mature way, it’s best to talk to those who have been exclusive and tell them what you’ve been feeling. Hopefully, they apologize and everything is cool again. If they want to be petty and deny what you’re saying or simply refuse to change it, it may be time to distance yourself from the group. Try to find some friends (maybe the other “outcasts”!!) who care about spending time with you and just hang out with your old group occasionally when they’re doing something and invite you. Hopefully, you’ll find better friends or those cliquey ones will apologize and the group will be saved!

Scenario 2- someone in your friend group has been spending less time with y’all and more time with other people.

In this case, there can be drama regarding feelings of betrayal. If one of the girls in your #squad has recently started hanging out with another #squad and barely talks to y’all anymore, it can stir up anger and jealousy. Hopefully, the rest of the group understands that you can each have other friends, but it’s also understandable to be sad that they have seemed to jump ship. So, talk to them! I know it seems like a simple idea and maybe even a scary one but really it’s the most mature thing to do. I guarantee that if that person realizes that you’ve just been missing them, they’ll react a lot better than if you start angrily sub-tweeting them. Most drama in friend groups starts with immaturity so break the mold and be the nice friend who genuinely tries to fix things. Then, maybe they’ll be more conscious of what they’ve been doing and share their time more evenly.

Rumors and gossip are majorrrr causes for friend group drama. Once it gets around that Katie told Sarah something that she didn’t tell Mary, all hell breaks loose. A lot of times in friend groups, boundaries of information are blurred which can cause a whole storm of problems. It’s inevitable that some people within the group will be closer and share more information than with others and that’s perfectly normal. What’s not cool is when that information is about others in the group. There shouldn’t be gossip about your friends floating around if you’re really all friends. If you want to be able to trust your friends, they need to trust you too. So, if you hear gossip, don’t spread it. And if you do spread it and get caught just be honest and admit your mistakes…then hope your friends forgive you! 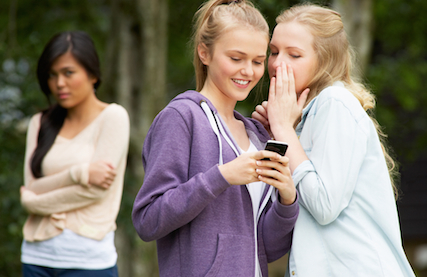 There’s that time in every young girl-clique’s life span when the first girl in your squad gets a boyfriend….we’re so happy for her! OMG BOYS! But, then, she starts spending all her time with him and not y’all and slowly your a little less excited about her new boo. You want to be happy for her but you’re pretty pissed she went to the movies with him instead of helping you find a hoco dress. So, when this type of friend drama pops up, what do you do? To reiterate, TALK TO THEM. It’s the best thing you can do in any of these scenarios. Tell her that y’all have been feeling a little thrown aside and are super happy for her but just miss your time with her. She’s not going to ditch her boyfriend completely but ideally, she’ll think more about how she’s dividing her time. Another strategy is to try and do group things that he can tag along to (maybe with a few of his friends) so that she can spend time with all the people she loves at once. That way, you’re also less threatened by him and aren’t as hurt!

Welp….I hope that helped! And, as always, you can submit questions HERE!