On Nov. 11 at 6:00 P.M., three days after the 2016 presidential election, protestors gathered at Historic Fourth Ward Park in Atlanta in objection to the victory of Republican candidate Donald Trump.

“I feel like acts of nonviolence and civil disobedience are the cornerstones of civil rights in this country. I think it’s important to be seen and heard so that you get those feelings out in a community situation, and also just so that you start forming a community,” Atlanta Protestor Gerlinda Grimes said.

Protesters included a relatively diverse group, including people of all ethnicities, ages,
and backgrounds. Before the group began to march downtown, people were invited to stand up and voice their opinions about the election outcome to the crowd. “I want to recognize that this moment is history finding itself. This country has a lot to reckon with and this is one more thing in its line. And we are going to be heard, today. And we recognize that it is going to take a lot. It’s going to take artists, it’s gonna take singers, it’s gonna take teachers, it’s gonna take all of us,” protest organizer Sara Khaled said.

The 2016 election has already been said to be historically significant for not just the outcome and reactions, but by how close the margins were for the electoral votes in many states. For example, in New Hampshire Hillary Clinton won by only 0.4% (2,701 votes). Similarly, in Wisconsin Donald Trump won by only 1% (27,257 votes). Yet, even though the election was one in which every vote was extremely crucial to the outcome, 43% of eligible voters chose not to vote. On top of that, while Donald Trump won the electoral college by 74 electoral votes, Hillary Clinton won the popular vote by more than 2 million votes. Thus, these factors have certainly added fuel to the flame of those who object to the outcome and are disappointed by America’s lack of participation.

“If anything, maybe this will inspire more of us to get off the couch, get off Facebook, and actually take part in this process. This is a hard lesson for America to learn,” Atlanta protestor Lisa Savas said.

But Atlanta has not been the only city reacting through protests. Protests to the election outcome have also been held in cities such as Chicago, Portland, New York City, Los Angeles, and all around the country – some of which have turned into violence. The act of the protests themselves has been a rather controversial topic, especially on social media, in that it seems people are divided by whether they think protestors should accept the election outcome or express their discontent. President-elect Donald Trump (the subject of the protests) first responded to the protests through Twitter on Nov. 10 tweeting: “Just had a very open and successful presidential election. Now professional protesters, incited by the media, are protesting. Very unfair!”

Trump again addressed protesters through Twitter the next day on Nov. 11 tweeting: “Love the fact that the small groups of protesters last night have passion for our great country. We will all come together and be proud!”

Meanwhile, President Barack Obama has not only urged President-Elect Trump to address groups that may feel scared by his future presidency, but also commented on the current election protests at his Nov. 17 joint-press conference in Berlin. Although President Obama has accepted the election outcome himself as seen in his commitment to a smooth transition of power, he avoided condemning current anti-Trump protesters. 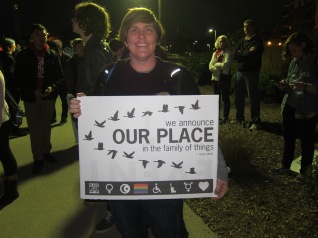 “One of the great things about our democracy is it expresses itself in all sorts of ways and that includes people protesting. I’ve been the subject of protests during the course of my eight years and I suspect that there’s not a president in our history that hasn’t been subject to these protests. So, I would not advise people who feel strongly or who are concerned about some of the issues that have been raised during the course of the campaign, I wouldn’t advise them to be silent,” President Obama said.